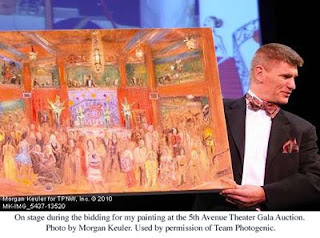 This year my vantage point was from the landing on the central staircase of the ornate Chinese entry hall. In 1926, architect Robert C. Reamer and interior designer Gustav F. Liljestrom modeled this interior after three of Imperial China's most splendid structures: the Forbidden City, the Temple of Heavenly Peace and the Summer Palace. It was restored to its glory in 1980.

The great challenge for me in painting this venue is editing— every detail can barely be observed, much less rendered in likeness, in a few hours. I’m learning to simplify, becoming more impressionistic, and still keep the essentials necessary to record a memory of a place and an evening.

At benefit auctions, items rarely sell for more than their stated value. This is because donated items are often products available to the public at market price— a case of wine, a vacation package, etc. But I paint only one painting during the cocktail hour and silent auction each year. Several patrons noticed themselves depicted in the painting, and others had reasons to want to remember this particular event in a singular way.

Mine was the last item in the live auction, and bidding for the 30” x 40” painting started at $1500. In a flurry of raised paddles, the asking bid quickly passed the stated value of $3750 (For a complete list of my fees for event paintings, go here). The drama then slowed, and drew itself out as other patient bidders replaced the early contenders. There was spontaneous applause each time the price passed another thousand dollars, and sustained applause as the gavel came down at $7250.

I’m looking forward to doing this again next year.

Posted by Sam Day - Wedding Painter at 2:09 PM No comments: 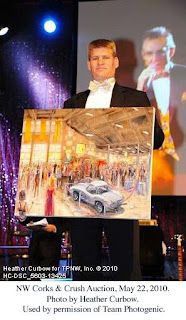 Northwest Corks and Crush was just like any other wine auction, except for the classic cars on display. It was like having a benefit auction in a car museum. The cars weren’t for sale, but were a great conversation starter for this crowd. I don’t think I’d ever painted a car before. The luxury for me was that they sat still long enough.

Given the freedom to choose my vantage, I set up my easel behind the rarest car I’m likely to ever see. This 1954 Ferrari 375 MMbelongs to Northwest philanthropists John and Mary Shirley, but is nicknamed for its earlier glamorous owner, Ingrid Bergman. Its estimated $20M value doesn’t just come from the touch of celebrity; it played a significant role in the history of the design of Ferraris. It was a single seat race car when Bergman’s husband, director Alberto Rossellini, bought it to drive on the streets of Rome, where it incurred some minor body damage. Rossellini returned it to the factory, asking them to make it into a coupé suitable for both him and his wife. The resulting design by Carrozzeria Scaglietti was the paradigm for perhaps the next twenty years of luxury performance road machines.

The north light that flooded into the arena throughout the afternoon and into the evening gave halos to the figures that passed in front of me. Painting these backlit patrons, I felt like I was back in art class with William Cummings, whose work I hadn’t thought had influenced me so much.

The winning bidder and his colleagues were painted in to the scene immediately after the auction.

In the above photo, the familiar auctioneer behind me is Jeff Randall. Photo by Heather Curbow. Used by permission of Team Photogenic. 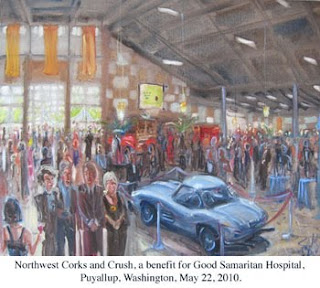 Posted by Sam Day - Wedding Painter at 5:01 PM No comments: