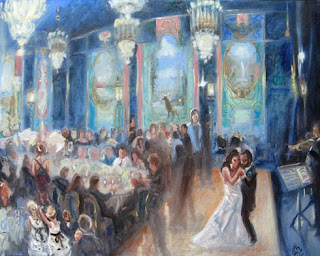 From the exterior, The Ruins has the appearance of an old warehouse— old enough to be torn down, that is, not old enough to be quaint. There is a painted door with a street number on it, and a doorbell. But it is in fact a “private dining club,” and inside this plain door is a richly dressed garden, and within that, what seems to be a building built within a building. We step through another, more auspicious door, and into a European palace, re-imagined for the Pacific Northwest. It is an eclectic collection of antiques, both real and recreated. A full sized equestrian statue painted all over with flowers stands in the hallway. There are several reception rooms, separate dining rooms, and two chef’s kitchens. It has the feel of something Mad Ludwig might have built, if he’d emigrated to Seattle by way of Venice, dragging with him the spoils of many garage sales.

The ballroom is Baroque, gilded, and covered in murals of Northwest scenes, wildlife, and Native American histories. Jennifer Carrasco spent three years painting these walls and ceiling. I had a couple of hours to copy them before the guests arrived.

As with the challenge of painting a reception in a room full of sunlight that goes dark before the painting is done, this room dims from blue to ghostly black when the chandeliers are dimmed. It glimmers, then. The gold trim shines and the murals glow. The large room feels intimate instead of cavernous. I find myself carving figures into the shadows.

I painted the couple as they danced. This can’t be done with a rapid line. But with a flat brush I could form simple shapes fast enough— a few dark strokes for a tux, a white space for a dress. Details of their faces were added later, as I got glimpses of them throughout the evening.

Posted by Sam Day - Wedding Painter at 10:52 AM No comments: 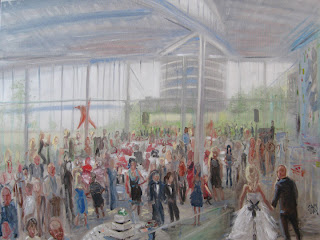 It makes so much sense that anyone getting married in an art museum should have an artist there to paint the occasion—especially when the artist has the same name as the acronym of the museum. The art museum in question was, of course, the Seattle Art Museum (SAM), and the specific venue was the Olympic Sculpture Park. The park sprawls over nine acres of waterfront in downtown Seattle, between Belltown and Myrtle Edwards Park, on Elliott Bay. Atop the highest elevation, the cornerstone and principal gateway of the park is the Paccar Pavilion, where the Roemer Davenport wedding was held. The event was celebrated under the watch of the statuesque installations of Roy Lichtenstein, Alexander Calder, Claus Oldenburg, Frank Stella, Louise Bourgois and others.

The families and friends of the bride and groom were as colorful and interesting as the art, and a pleasure to paint. The bride’s dress was like a cloud, in which a floor length black ribbon was continually getting lost. She matched the cake, a design as architectural as the building.

There were considerable challenges in painting this mind-bending space. The architect designed it to open up to space, rather than recede into it. That’s an artsy way of saying the perspective is backwards. The corners of a room usually appear, to the natural eye, to taper towards an implicit vanishing point on the horizon. That is, the far end of the room looks narrower than the nearer part, and that’s how we unconsciously know its father away. The lines of the corners of a room are the first things I paint, because that perspective then helps establish where everything else in the painting is, in relation to each other.

But in the Paccar Pavilion, looking north and west toward the gardens, Puget Sound, and the Olympic Mountains, the dimensions of the room get both broader and taller, so that the lines of one’s view expand to the sky. As I try to draw the room as a conventional square, it appears as if it has no corners.

The bride and groom graciously gave me time to meet with them before their rehearsal, and we discussed and agreed on my vantage point. I was on the stairs, which they descended as they entered the room after the ceremony, as man and wife.

It was the perfect view.

Posted by Sam Day - Wedding Painter at 8:16 PM No comments: