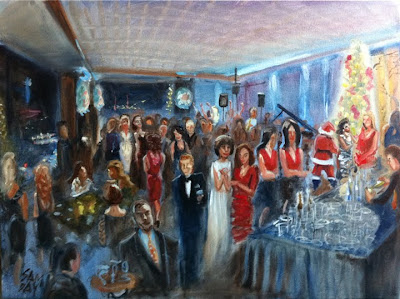 This is basically the holiday party for the Who’s Who of those who plan the parties in the greater Seattle-Tacoma area. So I was delighted to be invited to paint the event by organizers BreeAnn Gale and Adam Tiegs, who was also master of ceremonies. Adam appears in the painting as Santa Claus, on the right, near the tree. (BreeAnn is mingling in the crowd behind.)

Metaphorically serving us, front and center, is Mr. Don Boshears, Private Events Director of the Columbia Tower Club, where the event was held.

Looking down from the Columbia Tower Club’s 76th floor is like looking down from an airplane on its approach to SeaTac Airport. The club is more than a thousand feet above the waterfront, five blocks away. With a good pair of binoculars, I could see the self portrait in the window of my studio, in the nearby neighborhood of Pioneer Square. Looking out to the horizon, there are mountains and sea for a hundred miles. I wasn’t there to paint the view, of course, and once the sun goes down it’s all just lights in the blackness anyway. But Seattleites who know this city view well might recognize a series of dots in the far window as the lights of 15th Avenue Northwest, climbing over the horizon in Ballard, and the red radio tower lights on Queen Anne Hill. Through the window on the left we see the waterfront, under reflections of the holiday party.

The brightest lights are at the party, however— the party planners of Puget Sound themselves.