Rehearsal Dinner at The Ruins

At the foot of Queen Anne Hill in Seattle, not far from the Space Needle, opera and ballet, there’s a old boxy warehouse with the elegance of Europe inside. The Ruins is a private dining club, where it seems we’ve entered the treasure hold of some keen-eyed collector’s rummaging trips to the continent. There are several comfortable sitting rooms for small parties, and a great dining room that feels like a trip to grandmas— if your grandma lived in a villa. And then there’s the ballroom.
The ceiling and walls of the ballroom are covered completely with murals of northwest scenes, by Jennifer Carrasco. All of her years of careful labor are loosely limned in about two hours’ work in my painting.
But that’s just backdrop to my client’s event.
This couple were married two days later at the Rainier Club. But this more intimate, unrushed evening was just for family and bridal party. The bride’s daughter, who spent a good deal of time serenading us at the piano, appears in the lower right with her flower girl friends, and her dog. 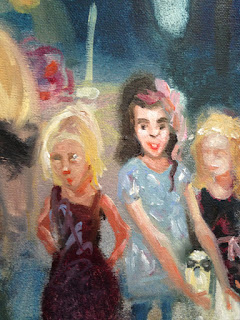 Posted by Sam Day - Wedding Painter at 3:46 PM No comments:

The Canal is a popular event venue overlooking the locks on the Lake Washington Ship Canal, which connects Lake Washington, Lake Union, and a sizable Alaskan fishing fleet to Puget Sound.  I’ve painted several weddings here, and my stepson and his wife had their reception here. The view from the dining hall is usually filled with boats queuing up to ascend the locks, and regularly includes both pleasure and commercial craft of many sizes. The view also includes a train bridge, and the sound of freight and Amtrak trains crossing adds ambience to the venue a couple of times an hour.
But the challenge for a wedding painter is to pair this amazing view with the one inside: the dance floor, the dinner, the spectacular bride and her lucky groom. So we have just a glimpse, at the right of the painting, out the south and west facing windows, to the bright, late sun reflecting on the water. The perspective is bent wide, more than 180 degrees, to the dinner on the far right. And, of course, the center of the painting focuses on the reason everyone came.

Posted by Sam Day - Wedding Painter at 3:31 PM No comments:

A Back Yard Wedding — Eatonville, WA