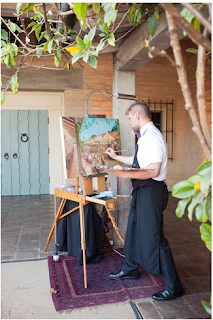 Style Unveiled, a national wedding blog, did this great spread about a wedding I painted in Santa Barbara this year.
See it here: Chanel & Kevin
Many thanks to Melissa Musgrove for great photography and great networking to get this wedding published! And, of course, thanks most of all to the great couple, for such a great wedding.

Posted by Sam Day - Wedding Painter at 12:12 PM No comments: 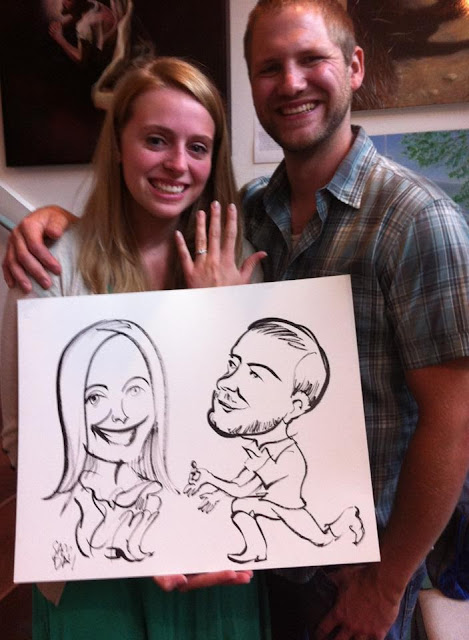 Sometimes the simplest jobs are the sweetest. This client brought his girlfriend in to the studio to have their caricatures done, and when they left, she was his fiancé. It was all prearranged, of course, and it happened just as planned. After drawing their faces, the last thing I drew was his body down on one knee, and then his hand presenting the ring, which he pulled out of his pocket just as her face showed that she suddenly understood what was happening.
Posted by Sam Day - Wedding Painter at 11:47 AM No comments: 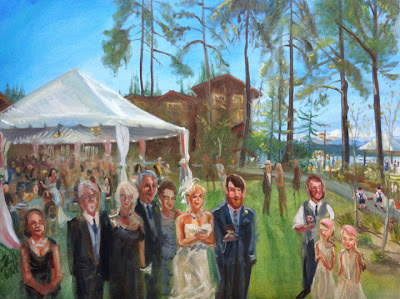 This was the fourth time I’ve painted at this great retreat, and I look forward to many more.
The two favorite ways for guests to arrive at Alderbrook Resort are by float plane, or by yacht. We vendors take the third, least expensive option.
We boarded a ferry in Seattle, then drove. The Kitsap Peninsula is shaped like the head of a cuttlefish, cradled on the east by the arms and fingers of Puget Sound, and on the west by the long, bent arm of Hood Canal. Some fifteen miles from Bremerton, we reached the muddy tip of the broad Canal (technically a fjord), and tooled fifteen miles more past the vacation homes that line its oyster caked beaches. It’s a woody, meandering road, smelling of fir, cedar, and saltwater. The hundred year old Alderbrook is suddenly there on the right. 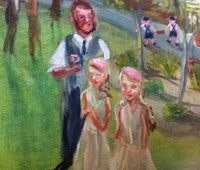 You could say this wedding was a marriage of blondes and beards. I got to paint plenty of both. There were the two year old twin boys, dressed like the little Dutch boy on the paint can, with blue pacifiers, who walked down the path bearing a sign that read “Here Comes the Bride;” there were the blond, freckled flower girls, in sparkly silver-grayish taupe summer dresses that easily accommodated their spontaneous soccer playing, and their sparkly feathery pink flapper skull caps pinned at a tilt. There were feathers in the flower arrangements too— the bride’s family supplies hundreds of thousands of chicken eggs a day for the region’s breakfast tables. I guess with that many chickens, you get feathers everywhere.
The well-whiskered groom, who’s family is in the boat business, turned out to be an amiable conversationalist, as he stood for his portrait. His equally well whiskered best man/brother stated in his toast that the groom could “talk to anybody about anything— he could talk to you for half an hour about your belt buckle.”
It was an unhurried wedding, in an unhurried place. It feels like a vacation every time I paint here. You can bet I swam in the Canal before we left. 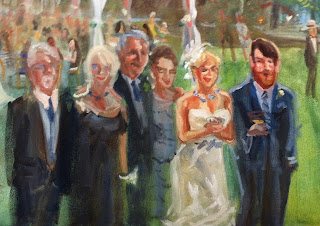 Posted by Sam Day - Wedding Painter at 7:19 PM No comments: 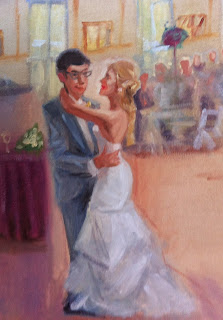 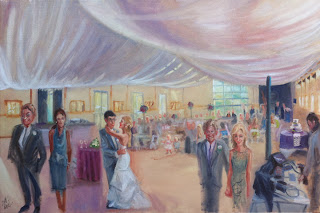 A barn is always a nice place for a wedding.
This particular barn is an important part of the history of Issaquah, a couple of lakes east of Seattle. It is now owned and maintained by the city, which restored it at generous expense.
The couple were married outside on the lawn, where cocktails followed. The reception then took place in the renovated dairy barn.

Posted by Sam Day - Wedding Painter at 8:31 AM No comments: 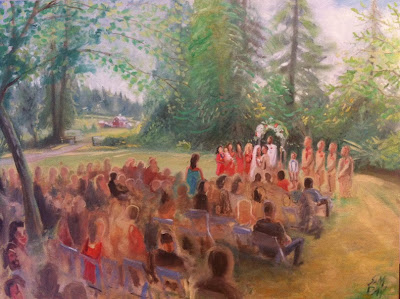 About an hour’s drive north of Seattle, there is a small farm growing hay and working a few cattle in bucolic pastures on either side of the Snohomish River. The river flows sleepily here, not many miles from where it empties into Puget Sound. Pebble beaches and cottonwood trees line its winding banks. And on a bend in the river next to such a beach, the family maintains their private campground, shaded by cedars, pines, and those enormous cottonwoods.
They gather here every summer for a reunion, lining up their RVs and tents around an open air dance hall, made from the timbers of the old dairy silo. A carefully stoked bonfire burns in a steel half-ton mortar from a nearby rock quarry, once used to crush local stone. The kids twirl sparklers at the river’s edge, guided by tiki torches from camp to beach and back.  Sloppy Joes and s’mores are the traditional cuisine.
This year, one tent was decorated differently: the words “Just Married” were spelled out on a hand made sign.
The farm is connected to the bride’s family. I am connected to the groom by way of having painted his brother’s wedding in 2006. None of us can remember how the first couple found out about my services.
I have been to some very elaborate weddings. I’ve been to weddings where a lot of money and effort is spent on creating an appearance of simplicity. But I’ve never painted at such a straight-forward, come-as-you-are, downright joyous celebration. The groom’s mother made an arbor of curly maple and flowers from Michael’s. The bride’s brother went out and got a license so he could marry them. They said the plans grew from there; four groomsmen wore sand colored suits with coral ties and boutonnieres, four bride’s maids wore coral dresses and teal necklaces. The groom’s ten year old son wore a teal bow tie and suspenders with a white shirt and shorts that matched the men’s suits.
As many couples do, they wrote their own vows. The groom’s were so earnest and thoughtful as to inspire me to strive to be a better husband. One line of advice from the officiator will always stay with me. He urged them to support one another’s dreams, “and if those dreams don’t come true, keep supporting until another one comes along.”
And when they kissed, the party began. The dancing went well into the long, warm, starlit night. But by the time of this writing, the couple will have decamped for their honeymoon in Maui.

Posted by Sam Day - Wedding Painter at 9:54 PM No comments: