Forbes Magazine recently called this “America’s Best Hotel," but the San Ysidro Ranch has been familiar with such accolades since it became a resort in 1892. In its early years it became a darling retreat for a new industry: Hollywood. Winston Churchill brought his family here. John Huston wrote the screenplay for The African Queen here. Sir Lawrence Olivier married Vivien Leigh in this same garden. The Kennedys honeymooned here; a cottage is named for them. Jessica Simpson got married here this summer.
But it is not a place of glamour and glitter to the glitterati: it’s a place to get away from all that. Indeed, it seems like Eden. Originally deeded along with the Santa Barbara Presidio by King Charles III of Spain in 1780, and for much of the 19th century a working citrus ranch, the property still covers five hundred acres. Two hundred of those acres are meticulously gardened, with not a pebble out of place. (I know, I tried to look for one to weigh down the vase that held my brushes. I probably would have had to hike down to the creek to find one.) The forty-one cottages are secluded and homey, unostentatiously decorated with antiques, oriental rugs, and fine paintings. It seems every structure is covered by bougainvillea.
Though there are many separate gardens— from the Rose Garden to the Chef’s Organic Garden (plotted with traditional Spanish geometry, with a fountain in the center)— this couple were married on the main lawn behind the hacienda, between the pergola and the reflecting pool full of water lilies, under a chuppah laden with hydrangea and roses.
I painted from mid afternoon until the end of cocktails, just before the sun set. The bride and groom found a few minutes to stand for their portraits between photos and dinner at the Stonehouse Restaurant, a short stroll away. I then took the easel down to the Hydrangea Cottage, where the painting was displayed during dancing in the courtyard.
Adjacent to that structure, I relaxed in what became my favorite building on the property: the old faithfully restored adobe cabin, which dates to 1825.
Posted by Sam Day - Wedding Painter at 12:16 PM No comments:


Kristy and Will had a simple, family centered wedding, packed with guests from both the United States and Taiwan. The ceremony was presided over by two ministers, and conducted in both English and Chinese, with translation for each. It was filled with music, performed by friends of the musical couple, and also sung by the congregation as a hymn, and included the serving of Communion. I more often paint receptions than ceremonies, but the length of this one made it possible. The couple met in this church, so a painting in the chapel itself has special significance for them.

Posted by Sam Day - Wedding Painter at 1:09 PM No comments:

Caricatures at a Company Picnic

As much as I love doing oil paintings at weddings, every time I get a caricature gig, I wonder why I don’t do this more often. There’s nothing I love drawing  more— or painting— than people.
This was a fun gig, because of the people who make up the company, which produces well known games for every digital platform. They’re young, smart, hip, and wear a wide variety of facial hair. Just reading their tee shirts requires some thought. And, of course, they brought some kids. 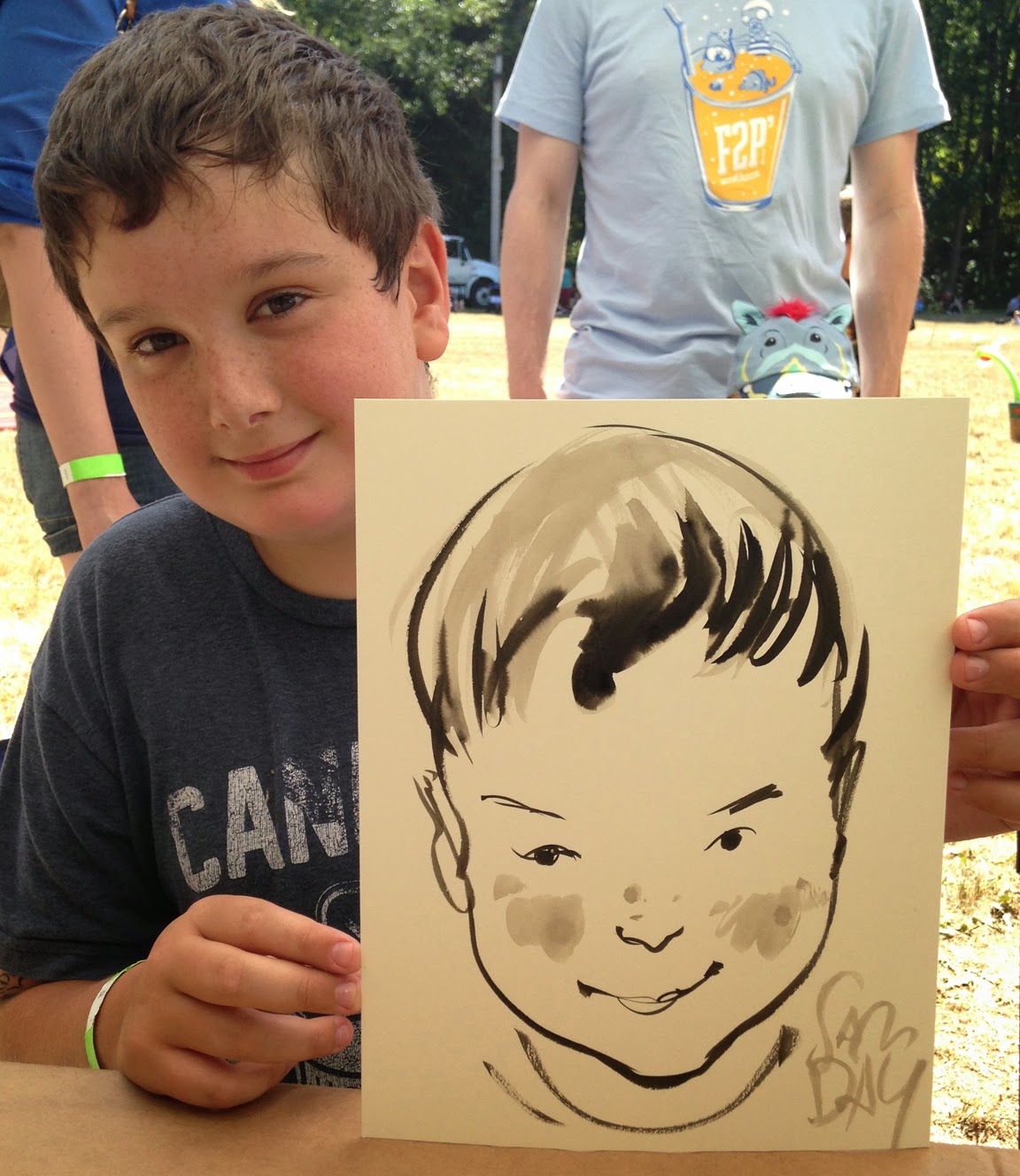 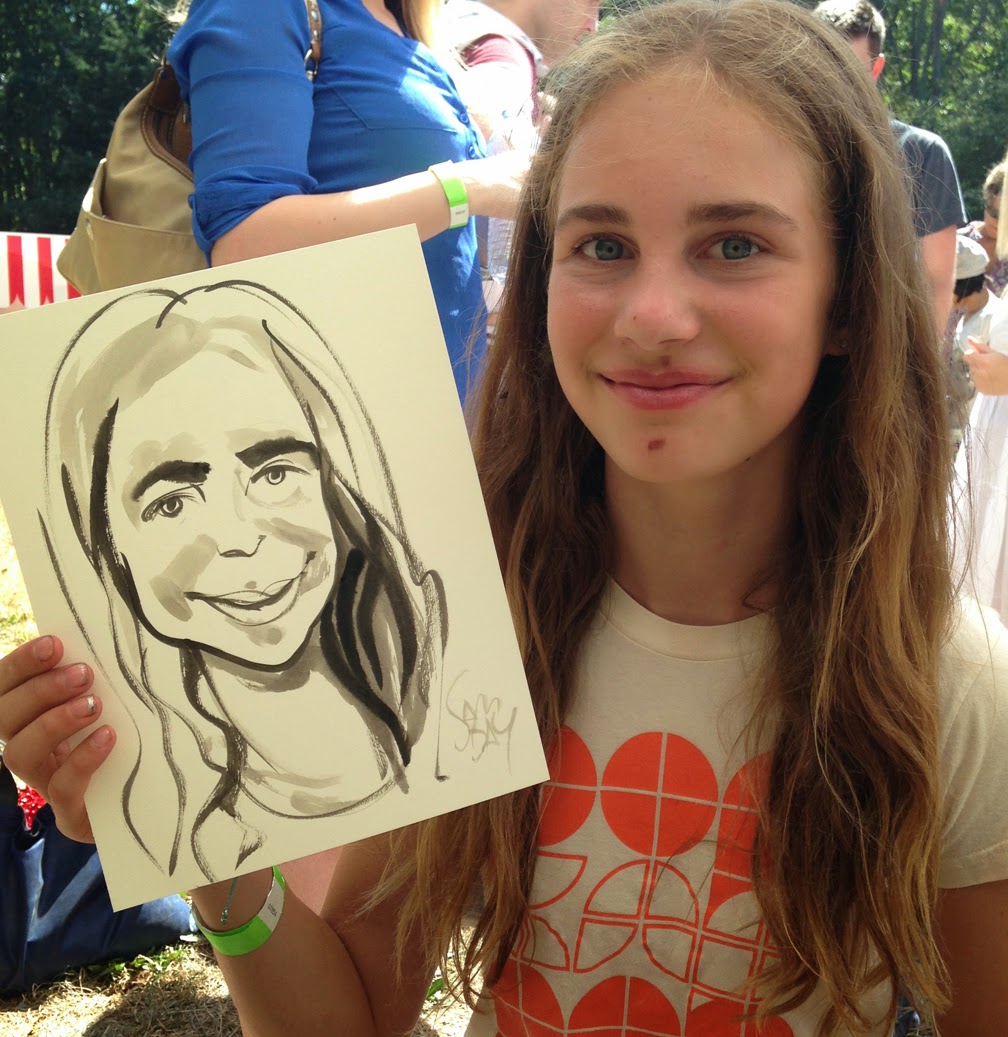 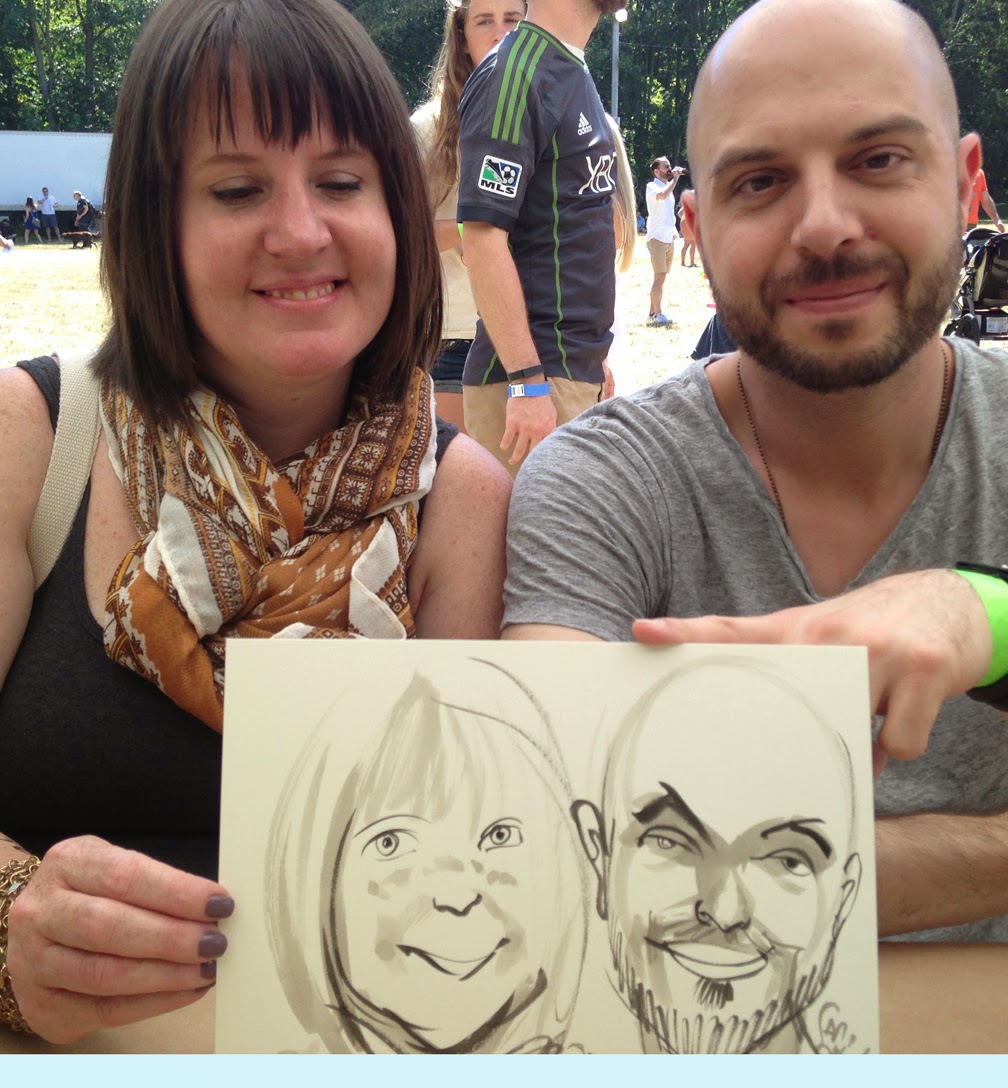 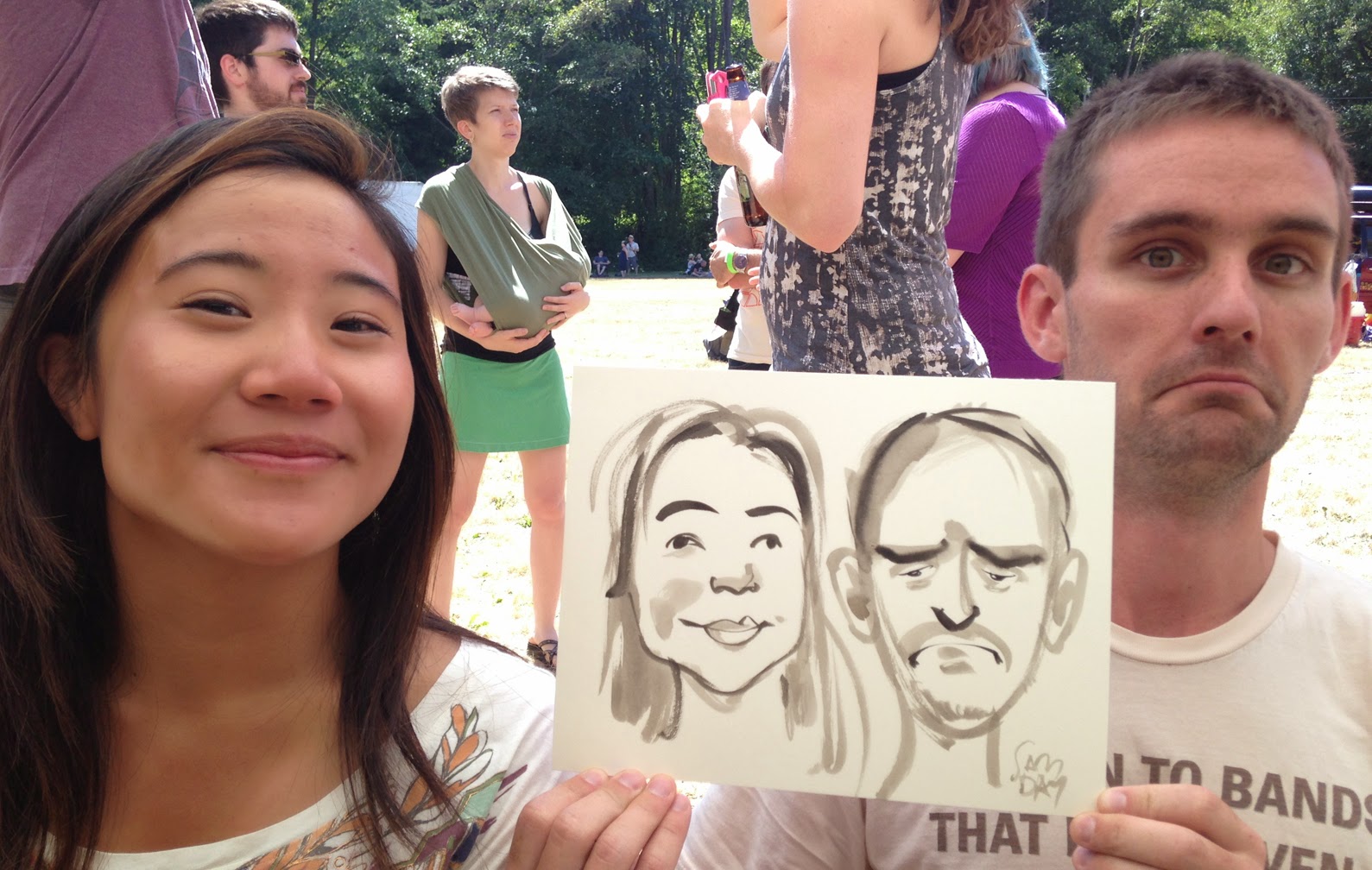 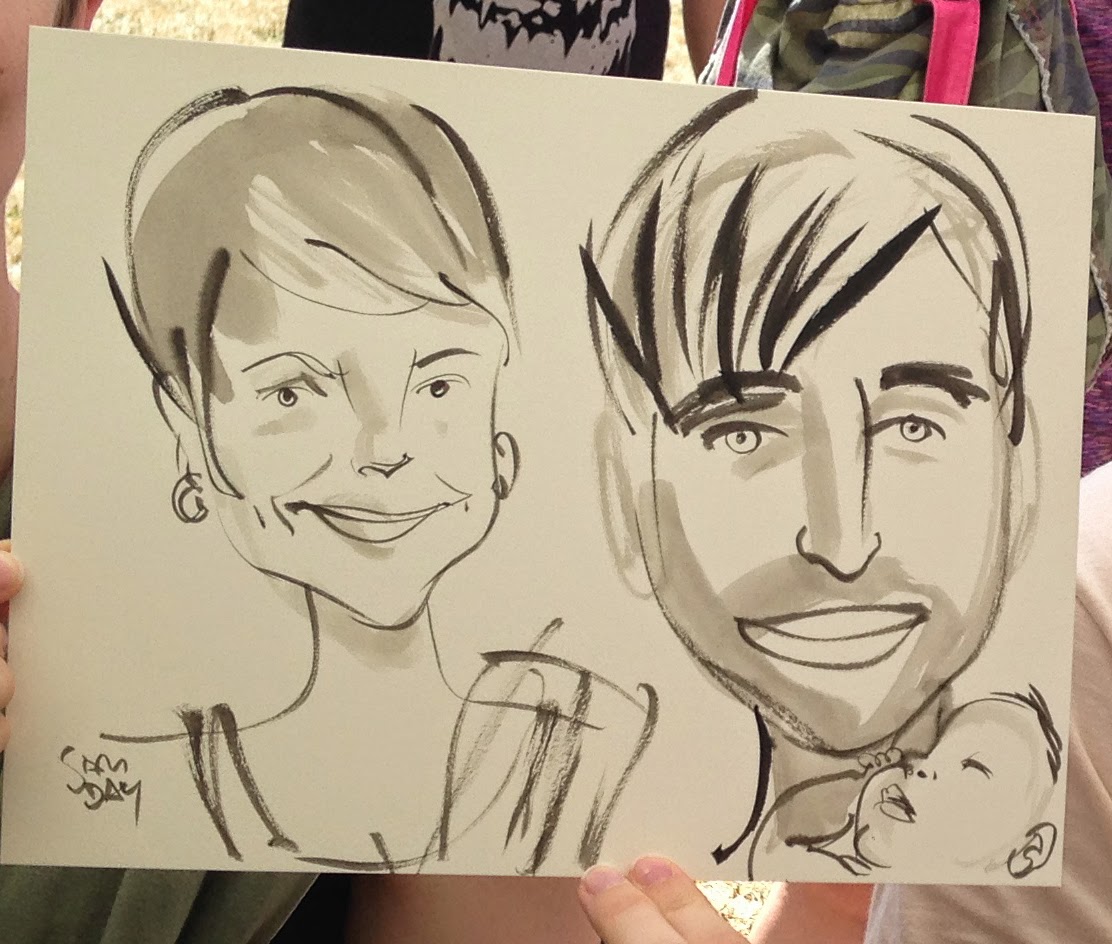 Posted by Sam Day - Wedding Painter at 7:26 PM No comments:

Laina and Mo at the Fremont Foundry, Seattle


Event venues can be made from anything these days. The Fremont Foundry is a magnificent space that preserves an old industrial metal works, including a fully functioning gantry crane (not pictured). It mostly just lifts a massive chandelier, but it’s there if you need to lift something really heavy.  That’s in the atrium, of course, where dinner was served. The setting for my painting was the penthouse. The ceremony was outside on one of the expansive roof decks, as were cocktails, during which guests flowed in and out of the penthouse. After dinner downstairs, they came back up to the penthouse for dancing.
My painting depicts both ends of the evening. On the left, through a window, we see the ceremony, with the wedding party lined up against the skyline. It’s a small, loose rendering; a detail in the background. On the right, through another window, we see the guests at cocktails. Through higher windows, we see the changing light at dusk. And in the center of the dance floor, the couple poses with their mothers.
Posted by Sam Day - Wedding Painter at 9:10 PM No comments: