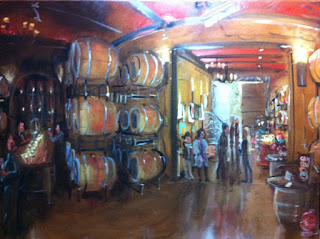 Well, this is the first time I’ve painted for several hours in a wine cellar, with the doors open, in January. The air was chilly, but the smiles were warm. The 2013 Weddings in Woodinville continues the tradition of bussing brides from one winery to another, for one luxurious day of food, drink, and elegant design offerings. The participating wineries were Columbia, where I painted last year, DeLille Cellars, Matthews Estate, Novelty Hill•Januik Winery, Willows Lodge, Woodhouse Wine Estates, and JM Cellars— where I painted this year.
Each winery is decorated by a different designer for the day, each with a separate caterer and array of specialty vendors. The offerings at JM Cellars were curated by event planner Melody Davis, of MG Davis Events, to whom I am most grateful for my inclusion.
Posted by Sam Day - Wedding Painter at 10:05 AM No comments: 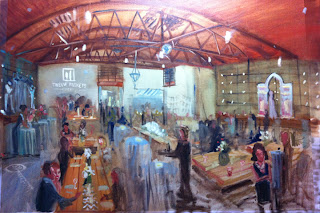 This is the second year I’ve participated in Twelve Baskets Catering’s annual open house tasting. The venue was the marvelous event space 415 Westlake, with its marvelous, glowing wood plank ceiling.
As I do this year after year, Twelve Baskets will have a growing collection of my paintings at their showroom in Kirkland.
Posted by Sam Day - Wedding Painter at 12:42 PM 1 comment: 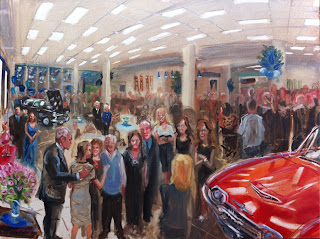 As much as I love painting live at weddings, it’s nice to throw in something different now and then.
Jerry Korum founded his Ford dealership in Puyallup, Washington, in 1963. After fifty years, he has no intention of quitting the business. His children threw him a (surprise!) party to commemorate the milestone. Among the guests were the mayor and the general in charge of nearby Joint Base Lewis-McChord, both praising the founder for his contributions to the community.
The bright car pictured at right, from the owner’s collection, is 1963 Thunderbird, the same body style that Thelma and Louise famously drove over a cliff. But his pride and joy is the ’57 Bird in the background at left, with the dainty opera window in the removable hardtop.
The owner and his wife greet guests in the foreground, and figures recognizable to them are scattered through the painting, both family and friends. Their youngest granddaughter dances on a riser just behind the roses. 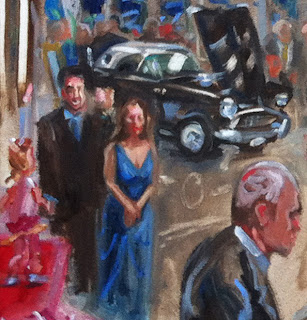 Posted by Sam Day - Wedding Painter at 12:41 PM No comments:


My prices remain unchanged for 2013.
Travel costs usually include just air fare and lodging for two nights, although larger paintings may take more preparation time at the destination.

Posted by Sam Day - Wedding Painter at 11:30 AM No comments: