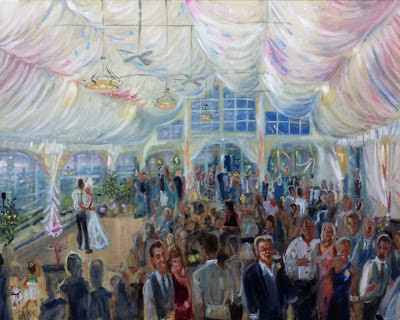 When I paint a wedding, one of my pleasures is the individuality and character of each couple, their event design, and the culture specific to their family and friends. This couple were part of Wazzu culture, the epicenter of which happens to be my hometown. I’ve painted at a few Cougar weddings. It was great to hear the WSU fight song again. (John Candy sang it in the movie ‘Stripes.’)

It’s also a pleasure to paint beautiful people, and this bride was so beautiful, it felt like a sacrifice to paint them on the dance floor instead of up close, where you could see her smile better. But the couple spent so much of the evening on the dance floor, it was quite appropriate to depict them there. These are the challenges of a wedding painter. Unlike a photographer, I’m creating just one image over the course of several hours. It is a montage of the event and the scope of its time, but depicted as a snapshot as if it all happened at once. Parents aren’t any easier to pin down to stand for a portrait, since they’re so happily mixing with their guests. But that’s why I stay ‘til the last dance, if need be. They’re here in front, as proud as they should be.
The venue was the Golf Club at Newcastle, perched a thousand or so feet above the suburbs of Seattle, almost in the foothills of the Cascade Mountains, with one of the most spectacular views of any venue in the region. The ceremony, and later the dancing, were held on Prestwick Terrace, a tented pavilion of circus proportions. Dinner was inside the clubhouse, in the St. Andrews Ballroom.  I painted the tent before and during the ceremony, including the expansive view, while anticipating how the light would change as the sun went down. But it wasn’t until nine o’clock, when the guests came back from dinner, that I was able to begin painting people.
And that’s my favorite part.

Thank you Sam!! It's gorgeous! And such kind words. It was a joy to have you at our wedding and we can't thank you enough :) -Kate and Kevin

Great post Sam! This is an excellent job-painting a wedding event, cool!