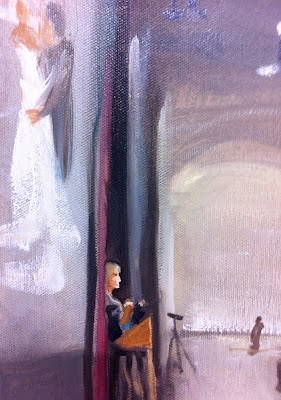 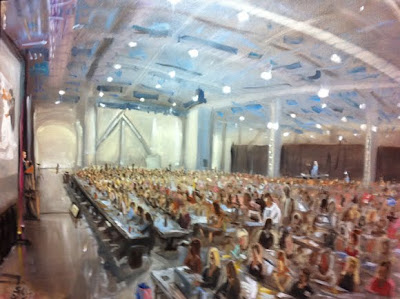 More than a week has gone by since the convention in Vegas, and I haven’t stopped to catch my breath. The Wedding MBA (Wedding Merchant Business Academy) draws over 2000 wedding professionals from all over the United States, Canada, and Mexico— and a few from overseas, as well. It’s a three-day pow-wow of speakers from the top of the industry, including publishers like Carley Roney, co-founder of The Knot, and Kathy Ireland, CEO of pretty much everything.

The morning of the first day is a general session, with the remainder of the conference broken into hourly classes of specific concern to various segments. I was asked to paint the general session.

Two thousand people fit quite snugly into a corner of a big exhibit hall at the Las Vegas Convention Center. There was a modest stage, and four big screens spread out in front of tables arranged as a massive classroom. I set up my easel about one screen away from the stage, and began at 8 a.m. with the opening talk. As I commonly do at weddings, I painted a view of about 180 degrees, like a wide-angle lens. But the painting only shows half the crowd; the other half is behind me. That's Carley Roney at the podium.

I finished at noon, as Andy Ebon wrapped up his remarks. He spoke about individuals who are distinctive in their disciplines, such as wedding planners or photographers, whose work separates them from their peers by excellence, creativity, or unique vision. I was the last professional he featured. The applause after his conclusion seemed just the right time for me to sign the painting, and take a little bow.

I’m deeply grateful to Andy for his remarks, and to Peter Merry for suggesting, and Shannon Underwood for allowing, me to be there.

The resulting attention was overwhelming. By the end of the afternoon, it was suggested I move my easel to a vendor booth, where I continued handing out business cards and responding to questions about my availability. I was, fortunately, able to attend some of the breakout sessions the other days, but convention goers were still asking to have their pictures taken with me until I packed the painting up at the end of the convention. (Shannon Underwood went home with the original.)

My expectations usually exceed actual results, because I’m a starry eyed artist, and I always expect my dreams to come true. I expected this event to get me gigs from the west coast to the east coast, and maybe Hawaii. I did not expect to be asked to travel to New Zealand and India.

This week I expedited a renewal of my passport.

Hey, this is a GREAT painting! You deserve all the attention you get!