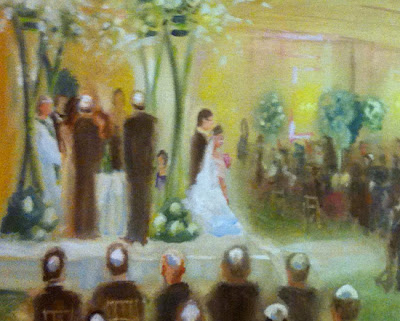 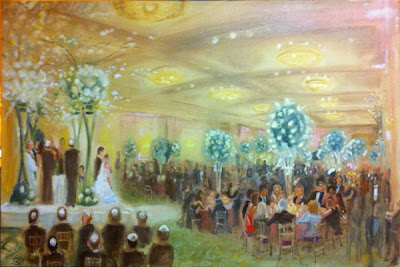 It is the tenth anniversary of the Twin Towers tragedy, and I’m in New York to paint a wedding. The Manhattan couple chose 9/10/11 for the auspicious sounding date.

Last night’s wedding was in the Hudson River valley, at the Pearl River Hilton. Although actually in New York State, about fifteen miles from the George Washington Bridge, some people at the hotel said, “Welcome to New Jersey.” It was a beautiful drive up the river: fall foliage, an almost cloudless sky, and amber evening light on the cliffs. The hotel looks like a French chateau. There were groundhogs on the lawn.

The ballroom was filled with thousands of white flowers. The florist told me just the roses alone numbered six thousand. They were accompanied by fresia, orchids, peonies, and flowered branches.

A chuppah was built of columns topped with enormous balls of these flowers and branches, arching over the ceremony like a canopy. Foot lights cast shadows of the branches on the ceiling.

Three hundred chairs faced the chuppah, and behind that the ballroom was curtained from the reception tables. An archway through the curtains was made of flowering branches, through which the wedding party entered, two by two.

Herein lies the challenge for a wedding painter.

I was positioned to the left of the chuppah, with a long view down the room. But I could only see three fifths of it, until after the ceremony. As I lay the foundation of a painting, my first task is to draw the lines and surfaces of the room, establishing perspective, light and mood. This is done with oil washes and a broad brush, blended afterwards with a fan brush for soft focus. I then work into this background all the features of the painting. If there is anything I cannot change later in the process of the painting, this is it.

I found my workaround above the archway. What I called “curtains” were really sliding and folding walls, typically found in modern ballrooms. They went all the way to the ceiling. But they were open to the width of the makeshift archway, above which I could see the decorative lines and partitions of the ceiling, all the way to the back wall. It was a narrow glimpse. I could not see the back corners of the room, but I could see enough to imagine them.

I rarely paint ceremonies. Receptions last much longer. But that chuppah was so beautiful, and my position was so perfect. And as I began my architectural background, the wedding party came in with the rabbi for rehearsal. I had not expected this, but it gave me an additional hour to paint them in the positions they’d occupy during the wedding.

After the beautiful and reverent ceremony, the assembly adjourned for cocktails, the lights came up, and the hotel crew “flipped the room.” The flowered archway was rolled to the side, the partitions folded back into the walls, the tables brought forth, candles lit, and the lights dimmed once again.

Of course, as people left the room after the ceremony, many of them stopped by my easel for a closer look. When they came back in for dinner, they found a very transformed painting. On the left, the ceremony is bright, and on the right, the room is dimmed as it was seen later. Between the two, the couple descends a little stair, greeting their future. I spent the rest of the evening painting guests.

Every wedding painting I’ve done is a portrait of a space of time— four to eight hours— as the light changes and people move about. But this was the first time I put the ceremony and reception on the same canvas.

And the bride was pleased.

AWESOME!!! Thanks so much for sharing your experience... was thinking about you there, and hoping it would go well. You far surpassed yourself!!

I love it, I think it's one of your best!