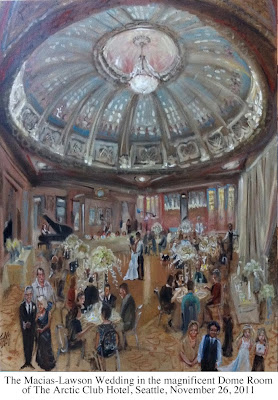 The Arctic Club Hotel is one of the greatest pieces of architecture in Seattle. Built in 1917, it is distinguished by two-dozen terra cotta walrus heads lining the Cherry Street and Third Avenue facades. After the Nisqually earthquake ten years ago, when the building was languishing as city offices, some of these walruses had their tusks held on with duct tape. But in recent years the building has been acquired and beautifully restored to its historic splendor by a company of Mr. William Lawson, whose son was married there on Saturday. 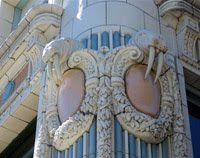 The building is mixture of architectural styles, but the Dome Room evokes Paris in the Belle Époque. I have painted in the room before, and I hope to again— many times. In fact, I think it would be my dream art studio. So it was really a privilege to paint the room for its new owners. 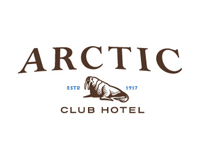 This painting was also an opportunity for me to do something I’ve never done before: a vertical wedding painting. The size and format were actually dictated by the wall on which the painting will eventually hang, but it works compositionally because of the Dome Room’s magnificent stained glass ceiling, which occupies the top half of the painting.

At most weddings and events, I paint on a French easel, which is a portable travel set designed in the days of the Impressionists to carry enough paints in the box for a plein aire outing. I use this for paintings up to 30 inches high, though it gets a little rickety with torque on paintings as wide as 40 inches. For the Macias-Lawson wedding, the canvas was 48 wide and 60 high— the second largest I’ve done for an event, and by far the tallest. I rented a van to move a big easel from the studio, even though the venue was just six blocks away! (Its also unadvisable to walk through the neighborhood carrying a big wet oil painting in the rain, after midnight.) The easel was designed for paintings up to 59 inches high, and needed a minor modification for this job. But it has a great sliding carriage, which allowed me to set the painting low at first, when I painted that grand ceiling before the wedding, and simply slide the whole thing up the ratcheted vertical support to paint the lower half during the reception. I used my French easel on the side for a tableau, to hold my paint and brushes.

It really would take a week to faithfully and realistically render the architectural details of this exquisite room. But as with paintings I’ve done at The Ruins, where an excellent muralist labored for three years to adorn the place, my scribblings are quick impressions, meant to evoke that single evening in its magic moment. By constricting my painting time to the time of the event (with some allowance to paint the setting in just the hours before), I control, harness, and channel the energy of expedience. If I were to take the painting back to the studio to touch it up, dither over it, and— as one of my illustration teachers called it — noodle it to death, that energy would leak out of the painting. Some people, upon hearing (but not seeing) what I do, ask me if I’m going to take a photo of the wedding, and do the whole painting back at the studio. I could, of course, and I could make the painting look just like the photo. But you can get that from any of several corporate studios that email your photos to China, where factory artists copy them faithfully for the cost of a good craft store frame. 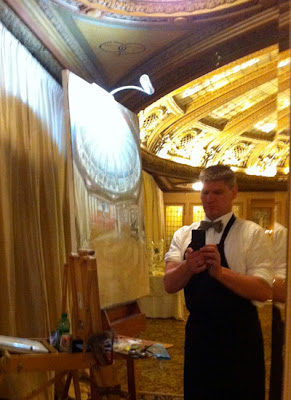 There are no photos from any wedding that depict what I paint; I do not capture a sliver of time in a click of a shutter, but the whole elapse of the evening over several hours. Mini-portrait-caricatures depict the key figures. The bride and groom, in this case, were painted in their entirety during their First Dance. I have to confess here that I take extensive liberties with perspective, even with my point of view. I have compressed nearly 180 degrees of view into this vertical rectangle. When a camera does this, we call it a fish-eye lens, and close objects become enormous and far details disappear. Its great for documenting architecture, but people, not so much. I paint as if I were on a ladder, and the floor angled like a raked stage. This allows me to give elements within the room relatively equal importance as events, rather than distorting closer things.

Artistry lies as much in the process and interpretation of what the artist sees, as in the skill with which it is rendered.